Between Land and Sea; The Atlantic Coast and the Transformation of New England (Cambridge, MA: Harvard University Press, 2014).

One of the largest estuaries on the North Atlantic coast, Narragansett Bay served as a gateway for colonial expansion in the seventeenth century and the birthplace of American industrialization in the late eighteenth. Christopher Pastore presents an environmental history of this watery corner of the Atlantic world, beginning with the first European settlement in 1636 and ending with the dissolution of the Blackstone Canal Company in 1849. Between Land and Sea traces how the Bay’s complex ecology shaped the contours of European habitation, trade, and resource use, and how littoral settlers in turn reconfigured the physical and cultural boundaries between humans and nature.

Narragansett Bay emerges in Pastore’s account as much more than a geological formation. Rather, he reimagines the nexus of land and sea as a brackish borderland shaped by the tension between what English settlers saw as improvable land and the perpetual forces of the North Atlantic Ocean. By draining swamps, damming rivers, and digging canals, settlers transformed a marshy coastal margin into a clearly defined edge. The resultant “coastline” proved less resilient, less able to absorb the blows of human initiative and natural variation than the soggy fractal of water and earth it replaced.

Today, as sea levels rise and superstorms batter coasts with increasing ferocity, Between Land and Sea calls on the environmentally-minded to make a space in their notions of progress for impermanence and uncertainty in the natural world. 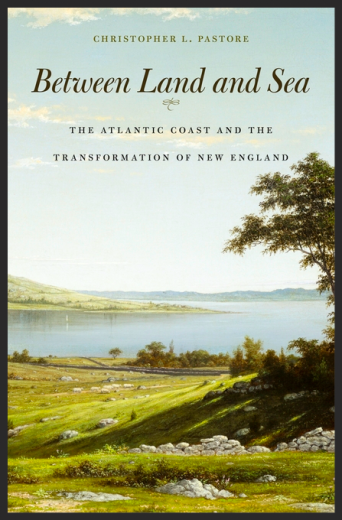 “In this highly descriptive, carefully written volume, Pastore takes a close look at the interaction between nature, humans, and the built environment with a focus on New England’s Narragansett Bay. He traces changes in climate, resources, and European settlers’ attitudes in the context of a fascinating geographic-conceptual zone that traverses the ‘unknowable’ sea to ‘uncertain’ estuaries to an ‘unknown’ inland… It was useful to read an analysis of Enlightenment scientific thought on climate and its relationship to religious attitudes of the time. Most fascinating is the juxtaposition here of the liminal space between land and sea and the liminal conceptual space between science and popular culture.”